They said it would snow.  I didn't believe them.

It has snowed over a foot and a half in the last day and a half.  It is amazing.  It is beautiful. 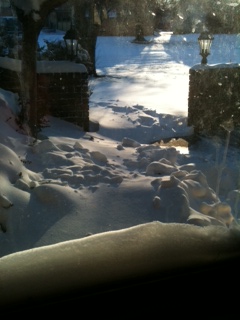 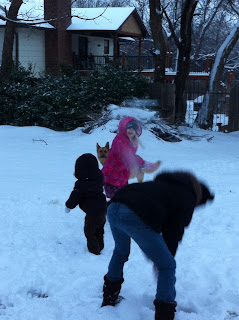 And it has trapped us in our house! lol  We tried to get out today and our car got stuck in the driveway.  Two feet outside of the garage.  Close to a foot of snow and the car was completely stuck.  We tried to rock it back and forth to move it just enough to get traction but it was no good.  We put ice melt under the tires...nothing.  We put planks under the tires for traction...no good.

We persevered and we won.  Until the car got stuck in the street in front of our house.  I think the car was actually high-centered because at least one tire was not touching anything!  My wonderful husband by this time had already been shoveling snow for about 30 minutes before he moved to start shoveling the street.  He shoveled out a path for our tires...nothing.  He put ice melt on the street to melt the ice from our spinning tires...nothing.  Planks...nothing.

We rocked the car back and forth for what seemed like forever.  Seriously, it was a very long time.  I was behind the wheel and Steven was pushing from the front to dislodge the car from the snow bank.  It was terribly exciting.  Especially when I was throwing the car into reverse, gunning it, and then throwing it into drive while gunning it.  All the while praying I didn't run over my husband.  Yeah, good times.

We eventually made it backwards about three feet and decided we couldn't make it to the hospital after all.  The decision to get the car back into the drive was easier said than done.  And I do mean that oh so literally. 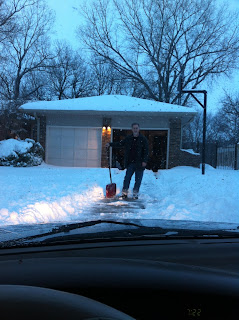 Steven cleared another path, a wider one this time, while our oldest started clearing the drive from the garage out.  It was very slow going as I sat in the warm car watching them shovel snow.  ;-)

After Steven had cleared a space of about 5 feet in front of me I decided to try and make it up into the driveway.  It worked and I gunned it a little too much.  The car lurched and started sliding right for Steven.  I mean the car was going 100mph and spinning wildly out of control.  No, really.

Okay, it wasn't going that fast but it scared the stuffing out of me.  And it didn't help any.  I went sideways and had to back up to where I had been previously.   grrr.  More work for the shovelers so I could straighten out and get back on the right path.

This time when I rocked the car back and forth I made it about three feet.  We almost threw a party!  It was pretty exciting but then I looked at how far we had to go and the party ended.  They were out there working hard and I was in the car crying.  Yeah, I was crying.  My step-dad was having surgery this morning and we were trying to get to the hospital to sit with my mom.  My sister couldn't get out of her town so mom was alone.

Steven worked quickly and we were able to get the car back in the garage just under an hour and a half after we left.  We were successful and I started crying even more.  sigh.

We went back into the house to some happy kiddos.  Well, they were happy we weren't going to be gone for the day but sad we couldn't see Papaw and Memaw.

A few hours later we talked to my mom and she really wanted some company so she said she would come and get us.  But we didn't want her driving on our street so Steven and I walked two or three blocks to get us to the main road to wait for her.

We misjudged the time and had to wait for almost 20 minutes!  We probably looked like vagabonds standing in the street (the sidewalks were knee-deep with snow) just waiting.  But it was kinda fun too!  We laughed and joked and I made ice with my feet.  Seriously I did.  The boots I borrowed from my 11yo-yes her feet are bigger than mine-don't have any insulation so I was losing heat through the soles of my feet.  The boots would stick to the snow causing it to melt and then I would pack it down and it would get slick.  I thought it was pretty cool.  Steven did not.  lol

Mom came, we went to the hospital, we stayed until he was out.  He is doing alright.  My dad came to get us and drove us home.  The roads were getting worse.  Even his 4wheel drive was struggling.

We made it home to five extremely happy kids and a clean kitchen.  ;-)

We had burritos for dinner and made snow ice cream for dessert.  It is so stinkin' yummy and rich.

All in all it has been a grand adventure this little snow storm of ours! 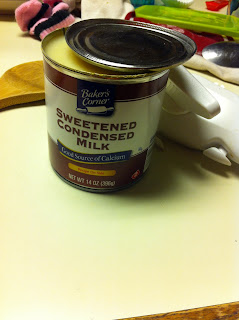 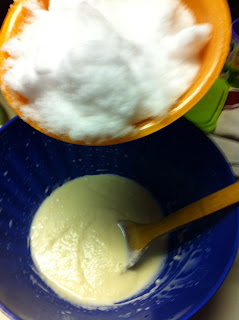 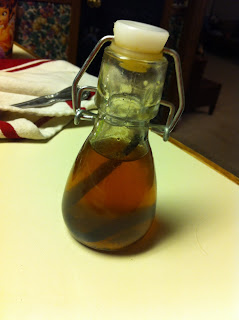 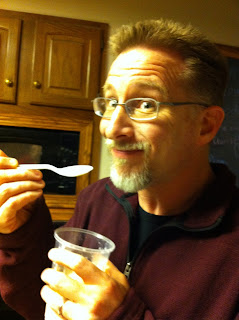 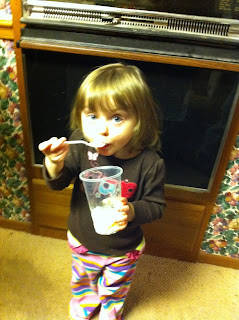 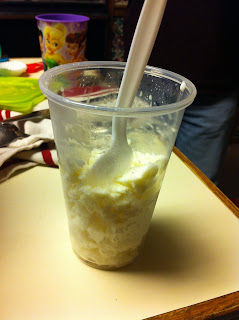 Bwaa, so much adventure! I need to get some condensed milk and try that, the girls would LOVE it!