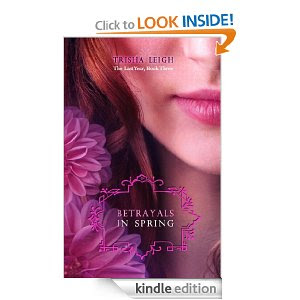 Betrayals in Spring by Trisha Leigh is the latest installment in a new book series, The Last Year, our family discovered. The first book Whispers in Autumn started the whole deal. I found it for free on a website and it sounded intriguing. It took about three chapters and I was hooked.

Winter Omens is the second book and I bought it as soon as I read the last words of Whispers in Autumn. I started reading it right away and couldn't put it down.

So when I had the chance to preview Betrayals in Spring before it came out I jumped at the chance. Literally.  I HAD to read this book. I had invested in these characters and wanted to know how their stories evolved.

Thankfully, I was able to do just that. I finished Betrayals in Spring but I'm not satisfied. The story didn't end with this book, I will of course be waiting with baited breath for the next one, and I am completely shocked at what happened in this one.

Don't worry, there are no spoilers in this review. I don't like it when people do that so I try not to. But I will say that this was another page turner that had me forsaking every day life to sit down and read! Betrayals in Spring had me so involved that it was all I thought about. Yes, I am a little OCD and once I start I have to finish but this story just needed to be read.

Okay, so if you don't know anything about The Last Year series let me give you a little synopsis of each book: 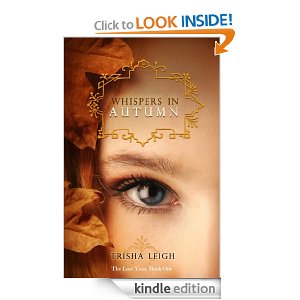 Whispers in Autumn:
In 2015, a race of alien Others conquered Earth. They enslaved humanity not by force, but through an aggressive mind control that turned people into contented, unquestioning robots.

Except sixteen-year-old Althea isn't content at all, and she doesn't need the mysterious note inside her locket to tell her she's Something Else. It also warns her to trust no one, so she hides the pieces that make her different, even though it means being alone.

The autumn she meets Lucas, everything changes.

Althea and Lucas are immune to the alien mind control, and together they search for the reason why. What they uncover is a stunning truth the Others never anticipated, one with the potential to free the brainwashed human race.

It's not who they are that makes them special, but what.

And what they are is a threat. One the Others are determined to eliminate for good. 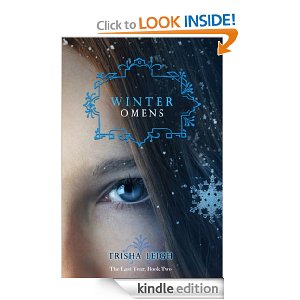 Winter Omens:
Althea and Lucas barely escaped the Others' clutches int he autumn, and were separated in the process. Alone and on the run from the cruel alien race determined to exterminate her, Althea struggles to adapt and survive in a world she never imagined.

When a boy named Pax appears out of nowhere, he quickly recognizes Althea for what she is-a human/Other hybrid just like him. Althea begs him to help her find Lucas, but Pax refuses, intent on following his own mysterious agenda.

The Others' presence continues to devour the planet's resources, and if history is an indication, they won't leave until Earth is destroyed beyond repair. Althea and Pax sense the only way to save themselves-and maybe their home-is to understand the powers simmering inside them.

Together they push the limits of their capabilities in the quiet Wilds, but are soon confronted with a terrifying fact: no place is safe from the relentless pursuit of the Others.

Least of all their own minds.


I know, right? This story of Althea, Lucas, Pax, and many others is wonderfully written. It is engaging and enthralling. I love the depth of the characters and the fact that we get to know them so well. We invest in their lives and care about what happens to them.

The Last Year is a great combination of Sci-Fi, romance (just a little and not a main focus), adventure, dystopian society, courage, hope, desperate acts of kids put in a grown up situation, and so much more. I have read all of them, my 14 yo daughter has read them and loved them, and my husband has read them. He loved them too! In fact, he was surprised how good they were. ;-) He did say that the romance between some of the characters was a little too much for him but he's a man and wants action, action, action! Let me just say that it wasn't enough to keep him away from the books. lol

Betrayals in Spring is another fabulous installment in this series that runs through the lives of the characters a mile a minute. At several points I was breathless with anticipation and then crying the next minute. There were twists and turns I wasn't expecting; which is saying a lot because I am pretty good at figuring out the plot of most books. I have to honestly say I thought I had this one figured out but in the final pages a twist occurred I wasn't expecting. At all. That's all I'm going to say about that. Don't ask, I won't tell.

Just read it for yourself.

I recommend this series if you liked the Hunger Games. In fact, that is why I started with the first one-it sounded similar. And it is. But it isn't. The Last Year is a bit better in that the violence factor is dialed down considerably compared to the Hunger Games but the character development, plot, and level of personal involvement the reader has is every bit as strong as in the Hunger Games. The Last Year is a story you could read many times and discover new things each time. I love the Sidhe characters and even the Others. They are given life and reasons for doing what they do, not just characters going through the motions because the author decided that's what they were going to do. I have to admit that I am concerned with and for the character Kendaja; I know I shouldn't be but I can't help it. Trisha Leigh has given this awful Other three dimensions and made me care about why she is the way she is.

There are so many other characters that we get to explore and care about that it is a wonderfully crafted and rounded out story. There is enough insight, information, and personal inspection from the characters, without overloading us with the minutia of it all. The details are vivid and alive-you can almost feel the crisp, winter air or the fragrance of the flowers Trisha describes.

Did I mention that I love this series?

The Last Year is a post-apocalyptic YA series that has appeal for all ages. Now, I wouldn't recommend younger than 12 or so, probably. I am fairly strict with what my kids read until they can read with discernment and have serious discussions about what they've read. But, I would have no problem with my 12 yo reading this series with me. 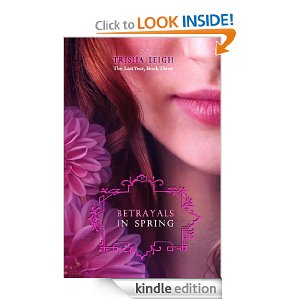 You should really check this series out for yourself.  Betrayals in Spring is out TODAY!!  Buy them all and let me know what you think.

The next one can not come out soon enough for me.