It's What's for Dinner

One of our favorite meals around here is Black Bean Taco Chili. I don't know where I got the recipe but we adore it. We usually make ourselves sick everytime we eat it! It is a hardy meal that is crazy simple to make. A definite must for a young person newly out on their own or a newly married couple.

Serve with tortilla chips, shredded cheese, sour cream and guacamole. (we usually only make it to the cheese and chips before we are devouring it!)

That's it. It is a great go to meal when you need to throw it together at the last minute or a simple meal to have ready at the end of the day.

Email ThisBlogThis!Share to TwitterShare to FacebookShare to Pinterest
Labels: recipes

Yeah, my blog is all but dead. I always mean to post but can't find the time to sit down and do it. How lame is that?

I actually do have the time I have just chosen not to.

Because I am lazy.

And I don't manage my time well.

And I got so behind that I just shut down.

This year is going to be different. I am going to slowly catch up on everything. It will take time but it is going to happen.

It probably won't be pretty but it will happen.

We celebrated Christmas a little differently this year. Bethany and Steven sang at all three Christmas Eve services this year. I was not happy about it. I guard Christmas Eve and keep it for our immediate family only. We open our pajamas, watch a movie, and eat snacks. It's what we do.

I would like to say that I was a mature adult about it when they told me but honestly, I was trying not to cry. It wasn't one of my finer moments. I walked away and thought about something else. I came to terms with it and they said yes.

Little did we know that Bethany would get sick right before Christmas. Really sick. She had to work a five hour shift on Christmas Eve and then go straight to church to sing. For almost three hours. She barely survived. Seriously. We gave her ibuprofen, EmmergenC, and tons of water. And lots and lots of prayer.

By the time she came home she was feverish and coughing up a lung. It was awful. For her and us!

Christmas day was even worse. She was feeling horrid. I started her on antibiotics and we set off for my in-laws. Beth stayed in a room sleeping most of the day but at least she was there, right? It was a really great day filled with food, family, and laughter.

That night was not so great. Bethany got worse and Steven and I got a stomach bug. Which Bethany caught a little later that night. Seems that it spread through the entire extended family. No lie. So Bethany was coughing up a lung with bronchitis and throwing up her guts from a stomach bug. Good times.

The next day we took her to the doc and got steroids to speed up the healing but it wasn't quick enough for her to go to work on Saturday. She spent four days in bed, literally.

The rest of us worked around the house and stayed away from the sickies. Yes, I was one of them but I kept working and rejected the feeling of throwing up. Yes, I said that. I refuse to throw up until it erupts out of me. I.hate.throwing.up.with.a.deadly.passion.

Steven and I started some projects on Saturday in betweeen napping and eating saltines. He worked on transferring my pantry to the walk-in closeet and building more shelves. He got it transferred but still needs to add in a few more shelves. I worked on the Reading Room.

We have had the reading room for a while but as of late it became a catch all for everyone's stuff. It started out that no one was allowed in my room but slowly it was overrun by kids and their stuff. I was just too busy to do much about it.

I was longing for a quiet place so I started on it Saturday. I rearranged the furniture and made the kids collect their crap stuff. I dusted and removed tables I didn't want anymore. It became a room I can't stay out of! I love it. It is once again my room and my quiet place. 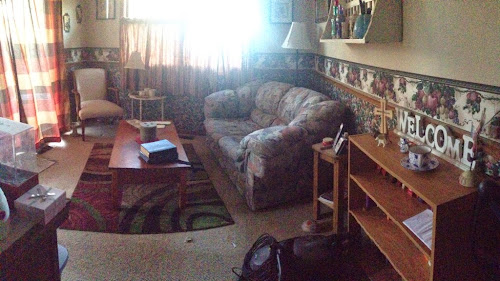 It was worth the queasy feeling throughout the day to be able to sit in there and relax.

Sunday we stayed home and slept and watched movies. Bethany stayed in bed almost all day unable to eat or walk without coughing. Bug came back after being gone all last week and we returned to normal.

We have one more Christmas and then the season will be at an end. The sickness will hopefully stay away and we can enjoy Steven being home.