Wow, what a weekend! I actually did take pictures yesterday, I just was too tired to post them!!

So, here they are! 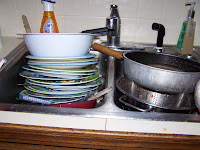 This is some of the carnage after fixing breakfast for 13 hungry kids. 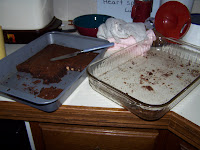 This is what is left of the brownies. And actually I took the picture too early, they ate more after I took this!

OH! I forgot to mention that on Saturday morning after the slumber party, I watched 4 more kids under 11 on top of the 9 that were already here! I was helping out a single father. So, I made over 40 waffles and we went through 1 gallon of milk, 1 container of syrup, over half a jar of peanut butter and every single plate and fork in my house! (at least the plates I was willing to let the kids use!!!) The extra kids showed up at 7:45 am and they left at around 12pm. It was a long morning; but it was fun!