The newest addition to our house!

We got a new addition to our house on Friday morning! Want to know what it is?

It was a total God thing. We called the repairman and he said it was toast and that we were lucky to have gotten that many years out of it. Evidently that washing machine was poorly made. So, we went and picked a new one. The place we went had just gotten a machine in that had a small dent on the top and so they were offering it for half price! WOOOHOOO! They delivered it Friday morning and I am still not caught up on the laundry. :( 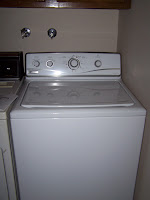 Isn't it pretty? It is so shiny and new! And you can't even see the ding on the top!