So it is once again time for our new Family Night.  Or was since it is now Saturday.

Anyway...This Terrell Family Night Revolution was Carnival Night.  I had been planning it for the last month and was super excited to have it happen.

The girls once again earned "money"/tickets for their every day things.  School, chores, helping around the house, good attitudes, etc.  I upped the ante this time because I knew that they would have to spend more to be able to play the carnival games.

We took two weeks, almost three, to earn tickets and shopped for the prizes together.  I didn't want to get junky things for them to win because then they would just be sitting around the house causing more clutter and chaos.  So, we went shopping at The Dollar Tree and found some great prizes.  We had three games and three different prizes.  The prizes were: a coffee mug(they love them almost as much as I do!), little tote baskets, and vinyl clings for their walls.

I wanted the prizes!  lol


Our evening started around 6:30 after we ate burgers and chips.  Yes, they had to pay for their meals too! That one didn't go over well!! bwahahaha!  But oh were the burgers good.  ;-)


We took a few minutes to set up and explain the rules and pricing then we were off.  The first game was Hoops.  I found some tiny basketball hoops and balls and taped them to the front door.  I put a tape line on the floor and they had to make 5 hoops to get their prize.  There was a bit of cheating going on but they all got their prize.  Although some had to spend quite a bit more money than the others.  ;-) 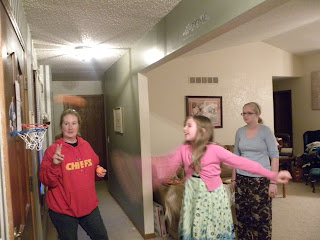 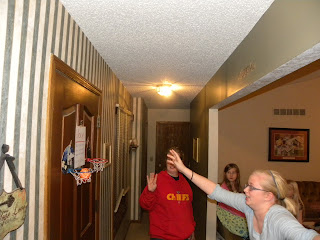 The next game was a Ball Toss.  I used 19 of my coffee mugs, there were still more in the cabinets, and put slips of paper inside them.  Each piece of paper had points on them.  There were 75, 100, and 200 slips.  They took a small bouncy ball and had to bounce it into the mugs.  They needed 300 points to get their prize.  Again, there was probably some cheating but it was a blast to watch them try to bounce the ball just right!  A couple had to spend some extra money to buy more chances, but everyone got their prize. 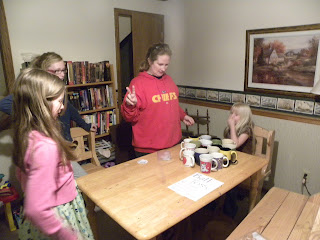 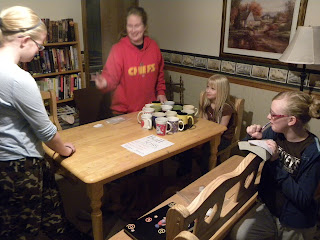 By this time we were all parched and needing some snack food.  The concessions stand was opened and way too much candy was bought.  We had the same offerings this time except without the nachos, popcorn, and chex mix.

After our break we played our last game.  We had to shoot spit wads at a target and get 175 points.  I drew four targets on a poster board, assigned values, and taped it to the wall.  I also set down a piece of cardboard to catch all the misses! lol  Come to find out, none of my kids had ever shot a spit wad before.  They really are sheltered.  heehee  They were actually pretty good at this one so no cheating was necessary. 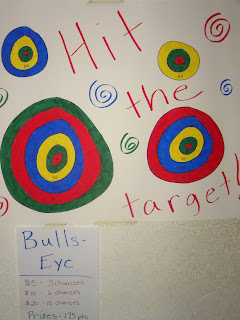 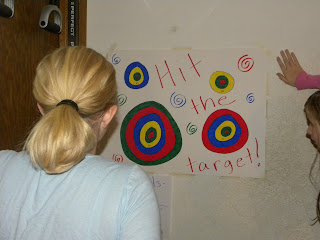 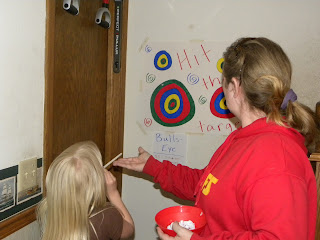 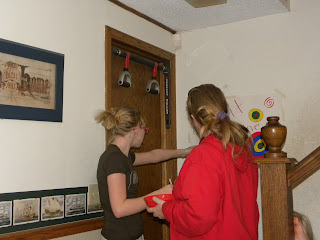 We ended the evening with a family movie and popcorn.  We had a ball.  We even had a dance break and taught Steven Tim Hawkins' choreography to Party in the USA!  Seeing him dancing around with the girls was completely worth all the hassle of setting up the night.  Priceless memories.

The kids are loving our new family nights and so are their parents.  I can't wait for the next one.

Looks like a fun family to be a part of! I can't wait for our girls to be big enough to do this sort of thing. Although, I am loving that we can do pizza and an hour long movie and put them to bed at 7:30/8, and still have time for the hubby and me to have our own time! I love our kids at every age, and I'm trying to enjoy each one.