**Warning: Profound gushing may occur spontaneously during this post.**

It is no secret that we are foreign language drop outs.  We have tried Spanish more times than I can count and it always bombs.  Latin is going quite a bit better than that but it is slow going.  We are just foreign language illiterate.

We have fallen in love with Visual Latin.  Seriously.in.love.

The girls audibly groaned and mumbled and gnashed their teeth when they saw the video case for this review.  It was not a happy day in our house.

So, I waited a few days before forcing them to sit down and watch the video.  Actually, I waited until we had some of their favorite snacks and bribed them to sit and watch it!  heehee 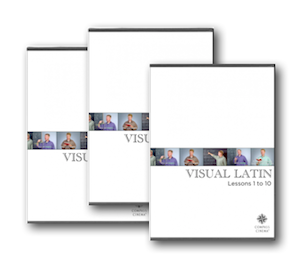 We watched the first Introduction video and there was silence at first.  That is until about thirty seconds into the Intro and then the laughter was so loud that we had to turn the volume up!  They were laughing and paying so much attention that we were having to back it up so they could hear everything.  When the first Inro video was over they wanted to watch the second one.  Then the second Intro video was over and they were begging to watch the next one.  It continued that way through the Intro videos and through several of the actual lessons.

In fact, they were having so much fun with it that it was absolutely no problem to get them to do more!

I LOVE Visual Latin!!  It made learning Latin fun and seemingly easy.  The girls have been going around the house using Latin words they learned in the videos and deciphering other words based on the Latin from the videos.  New worlds are being opened up for them through the learning of Latin and they are so excited to be learning it!  The worksheets are great and easily downloaded and printed.

We LOVE it!  I think with Visual Latin that I may actually learn Latin instead of just skimming the surface just enough to help the kids with their assignments.  The video segments are short and to the point and SUPER FUNNY!  They are real and kids just "get it."  You can watch a sample of the lessons here:


Or head over here to their website and get SIX FREE Lessons!  You can't beat that now can you?  Go on, watch the video I'll wait...

Funny, right?  This program is completely worth the time and money and you will get so much more out of it than you spend on it.  Wow, what a convoluted sentence...I just mean that it is a great program and I highly recommend it!

There are quite a few options for purchasing Visual Latin and this page explains them all.  You can purchase the entire DVD set for $80. That gets you Lessons 1-30 or you can purchase Lessons 1-10, 11- 20, and 21-30 all separately for $25/download or $30/DVD.   There is also pricing for Single Family or Group/Classroom use.   Wanna know why they created Visual Latin the way that they did?  Head over to this page and read all about it.  Have more questions-this page can answer most of them I would bet!  Don't miss the connect buttons on the left side of their home page where you can sign up for email Newsletters, following on Facebook or Twitter, or RSS Feeds.  There is also a YouTube button to watch videos.  How cool is that? 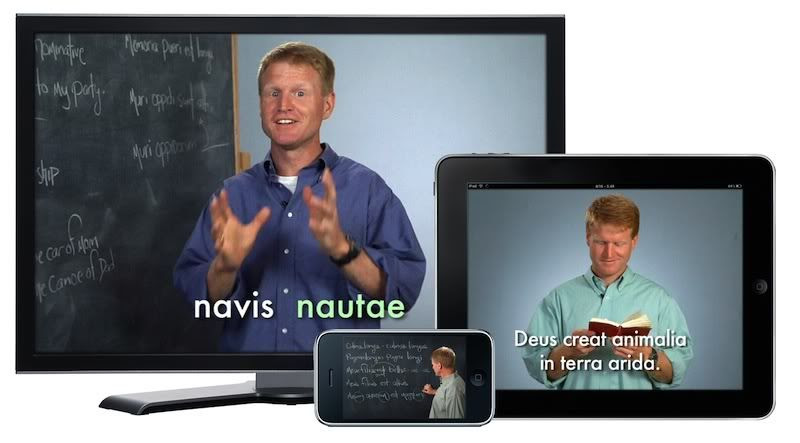 Head on over to The Crew Blog to find out what the other Crew members thought of Visual Latin.

**I was given a copy of Visual Latin through The TOS Crew in exchange for my honest review.

Isn't it fun when something turns out so much better than we expect?

Fabulous! I actually just stopped by your blog to see what you use for Latin. This looks like something right up our alley so we'll be trying it out.

Great review! We have certainly been enjoying Dwane's humor, too. My boys still aren't sure about this "learning Latin" thing! :p But if I can fit it into the budget, I'd really like to get the rest of Latin 1, as well!

Just stopping by from the Crew!

I burst out laughing at your warning. I should have read that before I posted my Visual Latin review... or at least before my Excellence in Literature review... spontaneous gushing certainly happened in both.

How exciting that it is working out so well for you! Here too. We now own it all... at least until the next set comes out in January...