Life Lessons that come with a laugh

Yesterday our van wouldn’t start.  Steven came home and got it started for me and we were set for the day.

Today, I needed to get our third dd to a bday party so we set out just in time to make it.  Only the van wouldn’t start.  Again.

I called Steven knowing that he wouldn’t be able to do anything, I just wanted to hear his voice.  We called the bday girls’ mom and let them know what was going on and told them we would get Peanut there if we could.

Thankfully, God worked out for our neighbors across the street to be home today.  They are almost never home during the day but they were today.  I sent our oldest over to ask for their help and got my 12yo to help me.  I put her in the drivers seat, turned the key, and put the car on neutral.  I explained which pedal was the brake and instructed her to push it down until I told her to let up on it.  I then started to push the car out of the garage.  Just as I got the van out of the garage I realized that she wasn’t steering it and it was headed into the grass!  I told her to push on the brake just as the neighbor came and asked if I had someone to put the brakes on!  She applied some pressure to the brakes but not enough to stop the car and so I started beating on the hood yelling, “Push down on the pedal, push down on the pedal!”  She finally did and the car came to a stop.

Whew!  I stopped pushing and started around to the drivers side when the van started moving again.  She let up on the brake!  I yelled for her to push down on the brake again but she wasn’t doing it hard enough and the van was still rolling backward towards the street!  I started pounding on the hood and yelling when she finally applied the brakes hard enough to stop the van.  I ran to the drivers door, yanked it open and applied the brakes.  I also put it in park before anything else could happen.

When said girl got out of the car I explained that the brake only worked as long as you kept pressing down on it.  her eyes grew wider than I had seen them and she exclaimed, “I thought that you only had to push on it one time and it would stay that way!!!”  lol I guess we have some explaining to do about cars and how to operate them.  heehee

Our neighbor came and we hooked up the cables making sure the girls knew that red was positive and black was negative and to not cross hook them up.  Also to never let the two clamps touch once they were hooked up to a car.

I won’t say that I’m thankful for the van not starting but it did provide some comic relief and opportunities to teach very applicable lessons.  Hopefully another opportunity such as this won’t happen again for a very long time! 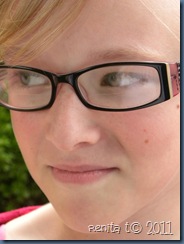 Said 12yo that got the experience of her life while trying to control an almost run away van!!

I'm trying so hard to email and am having a difficult time doing so. Would you mind emailing me? I am Sandi, and Christian SAHM, HSing mother to two daughters. My email is sfairband@woh.rr.com. I wanted to ask your permission for something.

I am using you as an experiment to try aswering using openID ... let's see if this works!

Also, I meant to come back much sooner than this to tell you that I shared this experience with my husband and daughters ... The Man laughed, and we both agreed that some life lessons do come with a laugh, but these lessons usually have the laughter at the end. I would have been terrified in your shoes. Now, my 9yo Dancing Bug thought this was way cool and believes your daughter rocks! Dancing Bug also thought it made sense to just tap the break once ... "wouldn't you just tap it again to make the car go?" ... baahahahaaaa! We have some work of our own to do!! :)