Another great game has been played at our house!  Much fun has been had by all and it has been requested as the evening entertainment every night since we opened the box.

What game is so much fun that the kids are begging to play it?

Say Anything Family Edition.  That's what it is.  And if you enjoy games you just have to get this one!

Say Anything is a light-hearted game about what you and your friends think.  It will get people talking, laughing and having fun in minutes.  Enjoy it with three to eight family members or as an hilarious party game with adults.  So dig deep into your heart or just come up with something witty - this is your chance to Say Anything!

We opened the box and were able to play it immediately.  The rules are simple and set up is a breeze.

Each player is given a dry erase board, marker, and meeple tokens that are color coded.  There is a score board, question cards and the Select-O-Matic 6000 to round out the contents of the box.

To play you need to select a Score Keeper who will get the Score board.  That was the coveted position in our family until they realized that they would all get a chance with the Select-O-Matic 6000!  lol  This state of the art gadget is passed from player to player when they are asking the question.  It is used to select the answer that the questioner chooses.  It wields great influence and seems to have special powers...but maybe that is just in our family!!

If your family is like ours then the players will start answering the questions based on who was asking the questions.  It got pretty crazy with several people insisting that they knew the "perfect" answer.  I won't say that some bribery or special favoring was used but I wouldn't deny it either.  ;-)

We had so much fun playing this game but there were also some poignant moments as well.  Like when my 9yo answered the question of What do you most want to do when you grow up with "Be a wife and mother."  Yeah, that was awesome to see. 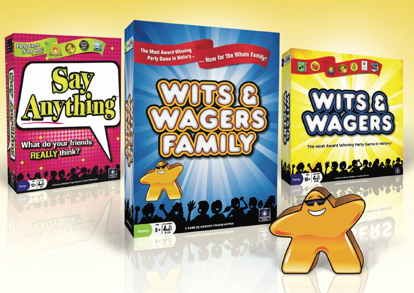 Say Anything Family is a great family game that would make a great addition to your family's game night. It is intended for ages 8 and up and for 3-6 players.  I will tell you that our 6yo played it and loved it!  It retails for $19.99 and can be purchased at retail stores like Target or Amazon.com.

To see what other Crew members thought of Say Anything, head over to The Crew Blog and check them out.

**I was given Say Anything through The TOS Crew in exchange for my honest review.

This sounds like a really fun game! (and what a sweet answer by your kiddo!)