Daddy's Got a Brand New Bag

A while back I made chicken quesadillas. My family really loves them. I make a bunch of them and we usually don't have very many left. Well, after the last time I made them, there were only 5 left. Two spicy chicken and two plain chicken.

When they were packaged up for dh to take them to work, they got mixed up and he ended up taking all of the plain chicken ones. That sent an uproar through the house!!

There was no end to the drama from dh taking the wrong quesadillas!!!

So, fast forward to this last week. I made them again. I made 20 in all!!! I wanted to be sure that there were enough for left-overs!

The girls put supper away that night with talks of making sure that their daddy did not take their stuff this time.

I did not think anything of it until, dh called me from work saying that he was keeping the zip-loc that they were in! He was laughing. That is a good thing, right? I mean, either he is laughing because it is funny or he is laughing because he is dreaming up the perfect punishment! (don't get all crazy on me here! you parents know that sometimes when you find the perfect way to discipline a given child in a given situation, it can make you a little giddy!! LOL)

He was laughing because of what was written on the zip-lock!

I went and looked at the zip-lock that was left in the fridge- well, you just have to see them! 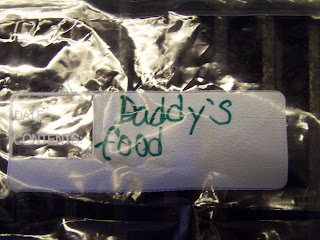 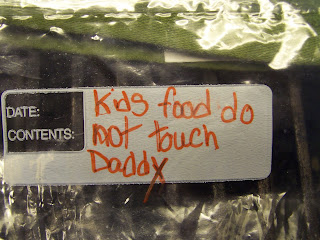 At least they know how to spell, right? HEHEHEH!

That's hilarious! I'm still laughing! This definitely looks like something that would be in our fridge! My daughter is always making notes to her dad!

That is funny! My dh is always asking the kids, "Who are my Boston Cream Pie yogurt?" Of course, there are a dozen other flavors to choose from, but everyone always likes the SAME one, lol.