In school right now we are studying early American History. We decided that we wanted to learn about the first settlers and the Pilgrims/Separatists.

We started with Jamestown and then went back to learn a little about Roanoke. The girls were fascinated with 'The Lost Colony'. They were very upset that the people were never found! We made maps of the area and looked to find Chesapeake Bay to mark where Roanoke was. Then we started Jamestown again.

Another thing that was interesting was that Pocohantas' father was not named Powhatan. His name was Wahunsunacock!! The name Powhatan was the name of the group of tribes from the area. Never knew that, either!

We learned about all the people that died in Jamestown and the diseases that killed them. I think the 'favorite' of our bunch was dysentery! The girls named that 'the pooping disease'!! Gross, but they remember it and why the settlers got it. :)

THEN, we did something FUN! WOOHO! We mad a 3-D model of Jamestown. It was quite fun and they look pretty cool! It is not a full replica; but, just enough to give us the idea of what it looked like. I don't think they will ever forget these lessons - I hope!

Here are some pictures of 'our' Jamestown's. 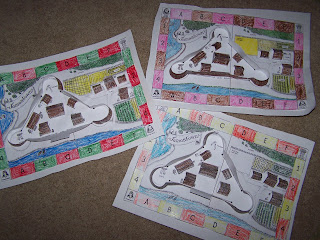 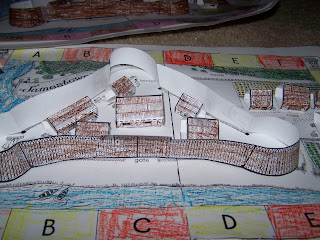 We also used these for Map Skills! I love it when things have multiple uses!!


Next we are onto the Separatists in England to follow them to Holland and eventually to the New World.

P.S. If you are wondering where we got this project from, we found the book on the Scholastic website. The book is entitled, Colonial America Easy Make and Learn Projects.

I love hearing about what everyone is doing in school. :) Your hands on activities are great!!! They did a fantastic job.

Great stuff on Jamestown! When my dh first mentioned considering Roanoke as a place to move, the only "Roanoke" I knew of was the Lost Colony.

When we study Jamestown again, it will be with a completely different view than before, now that we are living in VA! (Where our closest city is Roanoke, lol.)