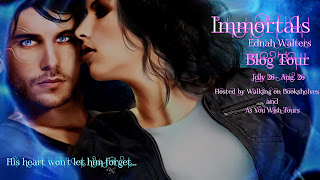 Nothing can stop Raine Cooper when she wants something…
Raine finally knows that her gorgeous neighbor, Torin St. James, is a legend straight out of Norse mythology, and that her feelings for him are strong. Torin is crazy about Raine too, breaking the one rule he lives by: Never fall for a mortal. The problem is he no longer remembers her, his memories erased by Norns—Norse destiny deities—to punish her for defying them.

She will make Torin forget his one rule a second time and fall in love with her all over again.
But she quickly learns that well-laid plans do not work when dealing with deities and supernatural beings. Desperate, Raine makes choices that could not only tear her and Torin further apart, but lead to the destruction of everything and everyone she loves.

REVIEW
I have been waiting on pins and needles for this book to come out.  I really loved the first one, Runes, and so did my daughter.  We devoured it and was so sad to see that the next one hadn't been published yet.  It's so hard to wait for a good book, isn't it?

Well, this one is worth the wait.  Immortals picks up right where Runes left off.  Which wasn't particularly a great place to be but at least we can finish it now!

Immortals takes you further on the journey of Raine and Torin with all the twists and turns of any good romance.  I enjoy the way Raine develops as a character and we get to see that evolution.  She is spunky and isn't whiney like so many characters in books.  I can see being friends with her.  Okay, maybe not because she has some seriously crazy stuff happening around her!  By the end of the book I was invested in her and her life.  I cried when things happened that I didn't like and punched my fist when people 'got theirs.'

Torin, Torin, Torin.  What can you say?  He is a great fictional character!  He is tough, tender, rough around the edges, and all out kick butt.  When the book first started I found myself yelling, in my head so people wouldn't think I was nutso, for him to remember.  He has to remember Raine!!!  aagghh  I won't give anything away but you just have to read this book.

Each of the characters in this book seem so alive.  From the swim team to the 'mean' girls at school.  They are all vivid and jump off the page for the eager reader.  Ednah Walters has my attention and I will look for her whenever I need a good read.

AUTHOR BIO
EDNAH WALTERS grew up reading Nancy Drew and the Hardy Boys and dreaming of one day writing her own stories. She is a stay-at-home mother of five humans and two American short-hair cats (one of which has ADHD) and a husband. When she is not writing, she’s at the gym doing Zumba or doing things with her family, reading, traveling or online chatting with fans.

Ednah is the author of The Guardian Legacy series, a YA fantasy series about children of the fallen angels, who fight demons and protect mankind. AWAKENED, the prequel was released by Pill Hill Press in September 2010 with rave reviews. BETRAYED, book one in the series was released by her new publisher Spencer Hill Press in June 2012 and HUNTED, the third installment, will be released April 2013. She’s working on the next book in the series, FORGOTTEN. Visit her at www.ednahwalters.com

Ednah also writes YA paranormal romance. RUNES is the first book in her new series. IMMORTALS is book 2. She is presently working on book 3, GRIMNIRS (Release date TBA). Read more about this series and the world she's created here www.runestheseries.com

Under the pseudonym E. B. Walters, Ednah writes contemporary romance. SLOW BURN, the first contemporary romance with suspense, was released in April 2011. It is the first book in the Fitzgerald family series. Since then she has published four more books in this series. She's presently working on book six. You can visit her online at or www.ebwalters.com.

**I received a copy of this book in order to review it.  The opinions in this review are my own honest opinions.

You poor girl. I just saw the spider bites. Feel better soon. Thanks for particiapting in the tour and loving this next instalment. Don't forget to post on Amazon on August 5th

Thanks for sharing your review and the giveaway. I am looking forward to reading Immortals. evamillien at gmail dot com