This weekend our Wichita Warriors Homeschool Soccer team is participating in the 11th Annual Northwest C-Team Women's Soccer Tournament.  Our team will be competing against public schools for first place.

Our first game, Friday night, was a bye so we got an automatic win when the other team forfeited.  We went ahead and scrimmaged a local high schools 'B' team but lost.  The outcome didn't matter in the tourney but it got our feet wet for the rest of the games.

This morning we had to show up for a 10 am game against another local high school team.  And let me tell you, our girls Showed up!  They came out hard and fast and only let up temporarily in late in the second half.  They did come back and keep fighting until the end and WON 1-0!!  It was a great victory and the girls were thrilled.

If we had lost that game we would have placed 3rd in the tournament.  But, since we won we were playing in the Championship Game later in the afternoon!  Woohoo!!!

We had a nice long break so the girls could rest before Championship Match.  The match for 1st and 2nd place would be the Warriors and a local Christian school we had played and beaten previously.  Their goal keeper was injured earlier in the day and they only had 11 players show up for the game.  They had to play with no subs and a substitute keeper.

The match started on time and we were to play 2-30 minute halves.  Both teams came out playing to win.  Both were fighting hard.  In the first 10-15 minutes one of our girls we fouled in the penalty box and got a free direct kick.  She booted it hard and found the sweet spot just to the side of the keeper and it went in!

There was no other score in the game.  Our defense was rocking it and completely frustrated their number one scorer.  They only fired off 4 or 5 shots on goal whereas we fired of around 15-20.  Our forwards were charging the ball and keeping possession.  They were passing well and following through when they shot on goal.   Our team really did a fantastic job today.

There were a few close calls but our keepers were right there scooping them up if it got past our defense.  Which wasn't often!  Our girls really played like a team and kicked some hiney.  ;-) 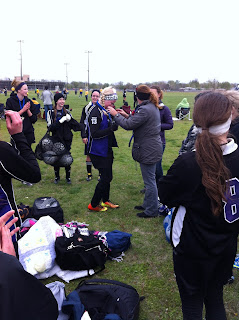 We ended up holding on to the 1-0 lead and WON FIRST PLACE IN THE TOURNAMENT!!!!  It was a great win and the girls are incredibly thrilled.

It was a cold and rainy weekend to watch soccer but it was totally worth it.  We couldn't be prouder of the whole team but especially of our Defender, number 13! 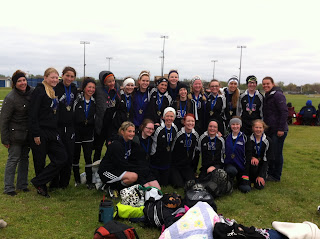 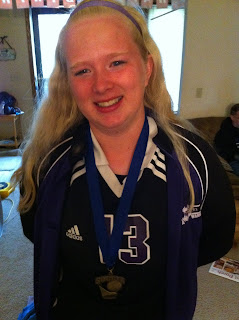 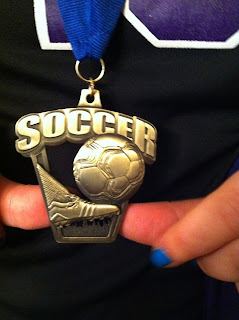 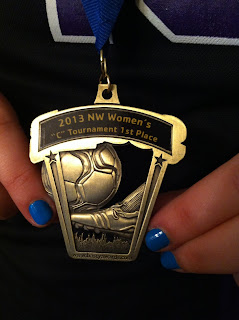