Well, last Thursday our 7yo, Bean, collided with someone while she was riding her bike. Instead of falling on her knees she put her hands down to catch herself. Yeah, that's what I said.

She came over to me and I checked her out and she appeared fine. She continued to play the rest of the afternoon but was favoring one arm. She continued holding her arm up and complaining the entire evening. Later that night we went for ice cream and I grabbed her for a hug and accidentally squeezed her arm. Her knees buckled and she started crying. I felt super bad. :(

We decided we would watch her and see how she was in the morning.

It wasn't any better the next morning. She would use it but it was pretty painful. So, I decided to take her that afternoon to our doctor and family friend. You know the one that we pay huge amounts of money to constantly. Yeah, that one.

He examined her and thought it was broken. Now, on one hand I was wanting it to be because who wants to go to the doctor and have it turn out to be nothing. But then again, you don't want it to be anything because then something is wrong. Right? Oh the joys of being a mom!

Anyway, the x-rays showed an unusual amount of swelling. And a hairline fracture. ugh

He didn't believe it was bad enough for a cast and the swelling was too great so he put it in a hard splint. The plan was to keep it in the splint for a few weeks.

That was the plan anyway.

Until she just couldn't walk like a normal human being. On Tuesday of this week she was "walking" up the stairs like a dog, don't ask it's just what she does, when she lost her balance and fell on her arm. She heard a pop. You read that right. I didn't say too much bc what am I gonna do. That and I was pretty upset so I kept quiet.

Then she went to gymnastics the following night. She was jsut supposed to do some cartwheels, splits, and things that didn't invlove her arm. That didn't turn out so well. She ended up doing the bars and using both hands to hang with. Oh yes she did.

We went to the doc the next day. He talked to her about obeying and doing the right thing then he told her that because she hadn't listened when we told her not to do those things she would have to have a full cast. We marched to the casting room and got a cast. 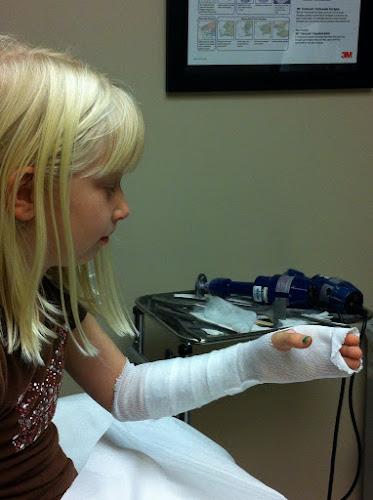 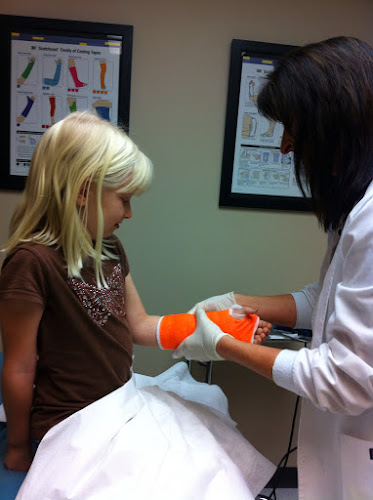 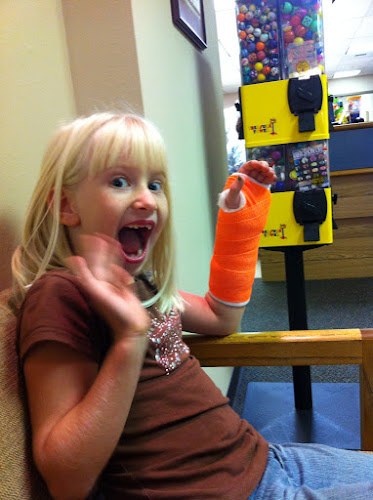 Two weeks in a full cast. It's going to be a long two weeks for everyone in this house!