(yeah, it's late.  I know.  vacation does that to a person! gonna post date it though to keep things straight.)

To say that a convention is overwhelming is probably a big understatement.  But they don't have to be.  Having a game plan is the biggest help.  That and having the schedule ahead of time.

I suggest printing off the schedule so you can study the workshops you want to attend.  Don't forget to plan in shopping time in the vendor hall and lunch!  After you have chosen your workshops put it down and come back to it later.  You never know, you might just change your mind.  ;-)

-Wear comfortable shoes and clothing.  You will be in them all day long.  lol  While that may not sound so bad sitting there on your couch, after the whole day of getting up and down and carrying you stuff around it matters.

-Take a bag or a collapsible box on wheels.  Yeah, you might feel like a goober at first but it will come in oh so handy later in the day.  Lugging all those books around gets crazy heavy around lunch time.

-Don't hesitate to miss a workshop to talk with a fellow homeschooler.  You never know what encouragement or information you can get from a casual conversation.

Now, for my Friday at convention I completely booked myself up with workshops and shopping.  Since it wasn't my first convention I was completely comfortable packing my schedule full.  ;-)  The first session was IEW.  They totally sold me.  I have been looking at their stuff for several years but finally made the commitment.  We'll see how it goes next year!

I can't say enough that you should get out and support your local homeschool convention.  It is so important because vendors will stop coming if the people don't show up.  Then there won't be a local convention for us to go to. 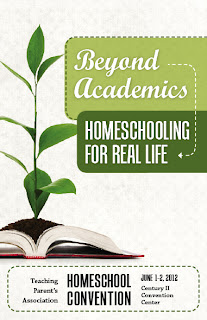 Anyway, our local TPA Convention had Todd Wilson as its' main speaker this year.  I'll tell you right now I went to every one of his workshops.  Yeah, I'm a stalker; but he is that good.  Our TPA nailed it on the head bringing him in.  He was encouraging and still admonished us at the same time.  If you haven't heard him or read his books-do.  They are worth it.

So, I followed Todd Wilson around a lot but I actually did some shopping too.  I was able to get most everything I needed for next year and didn't have to pay shipping!!  That's another advantage of going to you local homeschool convention-most vendors don't have you pay shipping.  I'm just sayin'.

There was so much I learned at The TPA Convention.  I will have to just make a posts of the quotes I wrote down.  lol

Hi Renita, Glad you had such a successful time at the homeschool convention. I really enjoy Todd Wilson as a speaker, too-- have only heard him once in a recording, but that was great! We used it for a discussion at one of our local homeschool support group meetings.