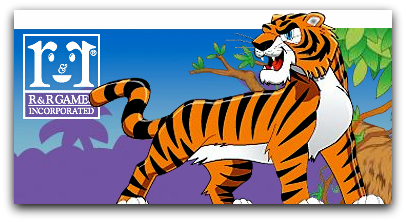 When you have kids that range from 13 down to 1 there usually aren't many games the entire family can play.  Well, okay probably none.  BUT, we did find a game that all but the 1yo could play together.  The 1yo enjoyed watching and laughing with us.

Flea Circus is the name of the game and let me just tell you-it is a blast!  It's a fairly simple game but oh so silly.  I was a little worried when I heard we were getting Flea Circus because we have actually had fleas-well the dog did-and it was no fun.  There was no laughter or high-fiving with those kinds of fleas. 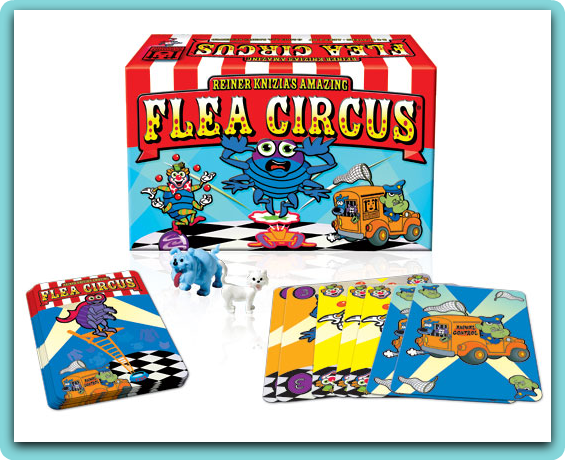 With Flea Circus the game, however, there is plenty of laughter and a little bit of devilry too!  This game from R & R Games is cleverly designed to engage everyone quickly and keep the fun rolling.

Here is a bit from the website about the game:

STEP RIGHT UP! Calling all Cats and Dogs! The Flea Circus is about to begin!

It's a wild time under the Big Top as dogs and cats race from one show to the next. Players use their best Flea Circus acts to attract the most cats and dogs. Play your cards right and you can steal the audience away from your neighbor! But watch out for the Animal Catcher... He'll snatch your cats and dogs away!

With all this excitement, how's a Flea Ring Circus supposed to keep up? When all the cats and dogs are gone, whoever ends up with the most animals at their show wins the game!

And really, it's just that simple.  The cards are dealt, the little dogs and cats are placed in the middle with the extra cards and the fun begins.  Each card has a picture on it that tells you what the value is and what action needs taken.  It took us a few turns to memorize them but that didn't slow us down!  We just kept the instructions handy and played on. 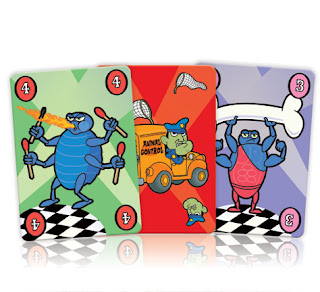 I must say that the dogs were the preferred item at our table.  Whenever the girls would get more cats than dogs, they would trade out for more dogs. lol  When it came down to the last dog, there was some strategizing going on to figure out how to get more dogs!  The kids were so consumed with the dogs and cats that they didn't realize when I won.  :-)


If you are looking for a fun an easy game to play with a wide variety of ages, I highly recommend Flea Circus.  It is recommended for ages 6 & up for 2 to 6 players.  I would not recommend more than 6 players because the amount of cards gets spread too thin.  If you needed to play with more than six you could just buy two games and combine them.  Which is what we might have to do in a few years to accommodate the seven of us!


Flea Circus is sold on the R & R Games website for $15.95.  There are small pieces so keep an eye on the little ones around this game. As a bonus R & R Games is offering our readers 20% off of Flea Circus or Pig Pile, the other game The Crew reviewed.  Just enter the coupon code, CREW20, to receive the discount now through December 31.


While you are over at the R & R Games website check out the other cool games they have.  I am positive you can find several that your family would love!

To see what other Crew Members thought of Flea Circus or to check out what other game they reviewed, head over to the Crew Blog.

**I was given a Flea Circus game through The TOS Crew in exchange for my honest review.

We've been enjoying Flea Circus, too! I think it's the cats that are the popular critters in our family! LOL