The Spider from Hell

I am NOT kidding. The girls called me upstairs saying that there was a spider in the popcorn bowl that they had left downstairs behind the couch. (don't ask) I didn't think too much of it because they routinely exaggerate things. No, really they do!!

Anyway, I went up a few minutes later to see said popcorn bowl with a larger metal bowl over it. When they told me that the spider was in there I wanted to see for myself. I lifted the metal bowl and didn't see anything. At this point I thought that they were making fun of my mortal fear of spiders. But then, it moved. 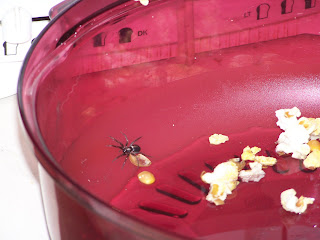 We all screamed in unison. It was a pretty large spider that looked like it had armor on. I instantly sprang into action to save my children. I screamed again, like a girl, and begged for someone to get me the can of hairspray. Mind you, I don't use hairspray; I just keep it for such occasions. 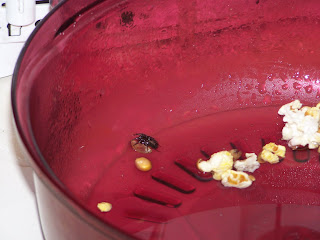 The mostly full can of spray was brought and I proceeded to spray him from a safe distance. When I was reasonably sure that he was not able to move, I discontinued the flow of lung choking aerosol.

I assumed that he was dead and we carried on with our business of getting rid of the offending freak of nature. I started more coffee to calm my nerves and when I turned around, he was not where I left him. He was trying to crawl up and out of the bowl. The side of the bowl was too slippery, though, so he was tromping over the old popcorn looking for an escape. I screamed, again. I demanded the can of hairspray that had been hastily put away and commenced spraying another 1/4 of the can at him. I didn't let up on the stream of noxious fumes until we started coughing from the cloud. He looked dead. Looks are deceiving.

My second born decided that she could smash him with the potato smasher. She was trying to be brave, really. It was very heroic of her and if it had worked, she would have gotten an ice cream cone or something. She was standing over him ready to strike when he started moving again. Seriously.

The look of shear terror that overcame her was one of the funniest things I have ever seen. I know that's cruel, but it really was! She screamed and ran away. Our oldest started screaming and I just continued screaming. Our third was downstairs by this point not wanting to be in on the drama and the youngest was screaming at random.
I engaged the can of hairspray again and he was still moving. I called for heavier ammo. I was given a can of Polyurethane. I sprayed only a little because I didn't want to ruin my bowl. Not that I will ever use it again; there was an armored spider in there, hello! 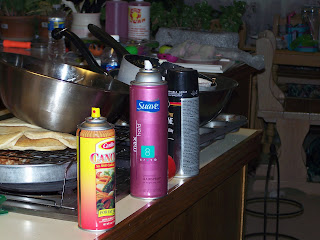 I stopped spraying long enough to ask for something else to spray him with when he moved again. I am not kidding. He was on a mission or something.

I held out my hand for another can of spray. A smallish can was put into my hand. I didn't even look at it. I immediately took the lid off and started spraying. It was canola oil. It seemed to work, but now we couldn't see him because it was all frothy in the bowl. 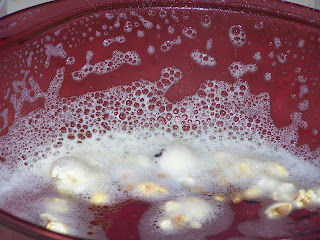 We stood there for a few minutes watching him. I was standing by my 9yodd when a bubble popped over the spider. I reacted without thinking and my hand flew out from my body and made contact with my dd. She jumped about two feet off the ground, spun in the air, and started running away screaming like a girl. I about wet my pants laughing at us.

He really was dead this time. At least I was hoping. I very carefully carried the bowl to the back yard with my 11yodd aiming the can of canola oil at the bowl and threw the bowl into the yard. I let it stay there for a while and then decided to retrieve it because it was an expensive Tupperware piece. 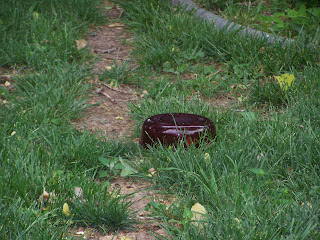 I carefully tiptoed around the bowl looking for the super-powered spider and kicked the bowl towards the house. When I kicked the bowl, it landed right in front of my oldest two who were holding the cans of spray aimed at the bowl. They screamed!

I finally made it to the bowl and executed a particularly hard maneuver without my hands; I turned the bowl over to inspect it! No spider.

The ordeal was finally over and we had only wasted 35minutes of our day! The time that I will lose in sleep tonight is another story though!!

That is to funny. look at my blog and you will know that that spider was nothing compared to mine. Still laughing.

This is too funny, I'm having trouble seeing because they are still watering from laughing. All you needed is to set fire to all the hairspray, only kidding it could have been a fire ball that was sent into outerspace. M

Mom, I would have lit it on fire if I thought I could have controlled it. My luck and I would have singed the girls' hair off when I started screaming and waving it around wildly!!!

That is hilarious!! Ah, hsing memories!!!!

That is TOO FUNNY!